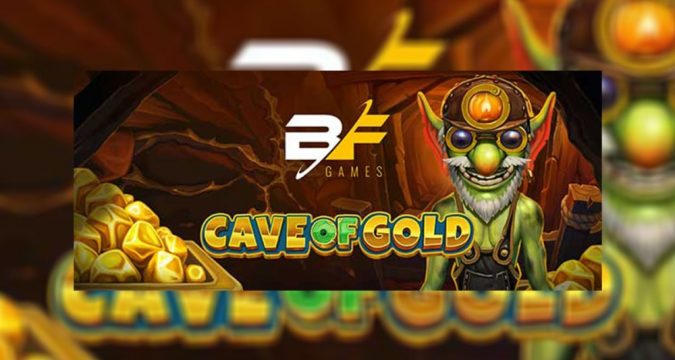 Dynamic slot development studio BF Games has followed up its hugely popular Cave of Fortune slot with another excavating adventure, Cave of Gold, once again featuring the series’ underground hero, the Goblin.

Players join the Goblin on a quest for treasures in an innovative take on the time-honoured slots theme of mining for gold brought to life with BF Games’ unmistakable design.

With a five-reel and three-row setup, BF Games’ latest addition to its growing portfolio invites players to enjoy 30 rock-tastic ways of axing through gleaming rewards.

The goal is to attain a Single, Double or Triple Nitro symbol on the reels and add it to the Nitro Counter. Once three Nitro symbols are collected, the Persistent Wild Feature is triggered, causing the reel to transform into a Persistent Wild Reel for the following three spins of the same bet amount.

When the Persistent Wild has been triggered on all five reels simultaneously, players are awarded 200x their bet. When there are two, three or four reels with Persistent Wild symbols respectively, players have the chances to mine 2x, 3x or 3x Multipliers.

If two, three, four or five Scatters appear during the Free Spin round, more bonus spins can be retriggered. Meanwhile, Bomb Wild symbols will aid players by blasting the reels via the Explode feature and wins are only achieved after these symbols have all been placed on the reel window.

Piotr Saluda, Product Owner at BF Games, said: “We’re delighted to continue the Goblin’s adventure with Cave of Gold, which takes the content from the first game to the next level. Once again, we’ve perfectly paired a brilliant math model with exciting features for a thrilling experience, and we couldn’t be happier with the work our art team has done in reimagining the Goblin’s underground world.

“We’re certain the game will appeal strongly to fans of the original and newcomers alike.”