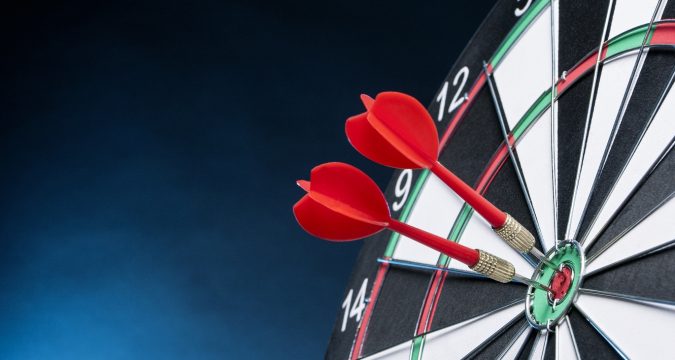 The 18th edition of the Premier League Darts sees a new format introduced, with each night comprising a final.

Last week Jonny Clayton won his second ‘night’ of the 2022 Premier League season to move level on points with Michael van Gerwen at the top of the table.

The Dutchman suffered his second opening-match defeat in the last three weeks, with his quarter-final victor James Wade progressing up the table by reaching his second final.

The league stage is now at the half-way point, with eight of the 16 rounds now completed. The unpredictability of the tournament to date means all the players still have a chance of making the play-offs, with just Wade and Michael Smith the only two players yet to take home a £10,000 winner prize for an individual night win.

This week the action moves north to Yorkshire with a repeat of the opening night fixtures, as the First Direct Arena in Leeds hosts Night 9.

The four quarter-finals on Thursday are as follows, with the winners of the first two matches playing the first semi-final, and the last two winners meeting in the other.

After threatening to finally get his PL campaign up-and-running, Michael Smith has reverted to type over the last fortnight with two opening-match defeats.

Bully Boy was never in contention when losing 6-1 to Jonny Clayton last week, with a petulant throw-away third dart during a leg in which he was still contending summing up his evening.

As one of the two players still without a ‘night’ win, he will need to refocus to ensure he does not find himself cut adrift from the play-off.

His opponent this week, Peter Wright, is steadily accruing points with three successive semi-final appearances. He can count himself slightly unfortunate last week as he would have progressed had his doubling not let him down against Clayton, missing 11 of his 15 darts at doubles in a high-quality match.

These two have met three times this year, including on the opening night of the Premier League, with Snakebite winning all three. Overall, the Scotsman has the much superior record too, winning eight of their last nine encounters.

With Smith also struggling for form in the Players Championship events over the weekend, it is hard to see anything but another Wright victory.

Next up, Gary Anderson takes on Michael van Gerwen.

The Flying Scotsman continues to struggle in this year’s tournament, with his out-of-the-blue win on Night 6 sandwiched by six opening match defeats.

Last week he led Peter Wright 4-2 in their quarter-final and was looking in good nick, before losing four of the next five legs to succumb 6-5.

Van Gerwen also lost his opening match last week in a surprise 6-2 defeat to James Wade, though he did bounce back to take the Players Championship 10 title on Saturday.

Anderson has won two of their last three meetings, including a 6-4 victory on PL Night 1, and although they currently sit top and bottom of the table this could be a lot closer than those positions suggest.

The Ferret averaged over 111 in a one-sided final last week, and after defeating James Wade 6-1 he said that “was as well as I can throw”. That followed an equally impressive semi-final victory over Peter Wright in which he also needed a ton-plus average to see off the Scot.

These two have met twice in the PL before this year, with the Welshman getting the better of RockStar both times.

Cullen remains in a play-off place, picking up points last week when defeating Gerwyn Price in his opening match before a subdued semi-final performance against James Wade saw his progress come to a halt.

Any repeat of last week will see Clayton ease through to the semis.

James Wade will look to take encouragement from last week’s performance which moved him off the bottom of the table, though the comprehensive loss in the final may weigh heavily on his mind.

Seeking his first ‘Night’ win, the Englishman opened with a score of 5 on his way to an average of under 84, which never put him in contention of the nightly prize.

He opens this week against Gerwyn Price, who followed his comments about the crowd influence the previous week with a lacklustre opening match defeat to Joe Cullen last week.

The fiery Welshman is far from the top of his game at the moment and made little progress in the Players Championship events over the weekend.

With both players sitting outside the play-off places and finding any sort of consistent run difficult to find, this is not an easy match to call.

However, preference is for the Iceman to take the honours in this match and show he can still be a factor in this year’s Premier League title conversation.

With a weekly prize of £10,000 for each individual night’s winner our forecast for Night 9 is a Scottish vs Welsh showdown, Anderson against Clayton, concluding the action on Thursday evening, with the Ferret bagging another £10k cash and maximum points.

What is the new Premier League Darts format? 📝

Each night will comprise a knockout tournament with quarter-finals, a semi-final and a final.

Players will receive two points for a semi-final finish, three points for ending runner-up and five points for winning a final. These points are fed into a league table, with the top four players at the end of the regular season of tournaments making it through to the play-offs.

Has the match format changed? 🔄

In the regular season, each match remains the best of 11 (first to six).

For finals night, the semi-finals are best of 19 legs and the final best of 21 legs.

How will the draw be made for the regular season? ⚱️

Each player will meet the other seven players twice in a quarter-final over the course of the 16 rounds. For the other two nights, 8 and 16, the quarter-final draw will be based on the league table at that time (1st vs 8th etc).

Will there still be Judgement Night? 👨‍⚖️

In the new format, Judgement Night will no longer be included and there is no relegation during the course of the season.

When do the matches take place? ⏰

There are 16 regular season tournaments, running from 3rd February to 19th May.

The play-offs for the players finishing in the top four positions in the league table will take place on 26th May.

Where can I watch the Premier League Darts on TV? 📺

Sky Sports will cover every night of the Premier League Darts.

What was unique in the Premier League Darts in 2021? 🤔

For the first time, the four semi-finalists were all from different nations.

Glen Durrant holds the dubious honour of becoming the first player to not win a single point, despite coming into the tournament as defending champion.

Who has won the most Premier League titles? 🔝

Starting in 2005, the Premier League Darts has run for 17 years.

Phil Taylor has the most wins (6), one more than Michael van Gerwen.

There have been 12 nine-dart finishes in the history of the Premier League, with both Jonny Clayton and José de Sousa achieving the perfect leg last year.

Back in 2010, Phil Taylor made history by achieving two nine-dart finishes in the same match; the final!

What prize money is at stake? 💸💸

The prize money for this year’s competition has increased to £1 million, including a £10,000 prize for each night’s individual winner.