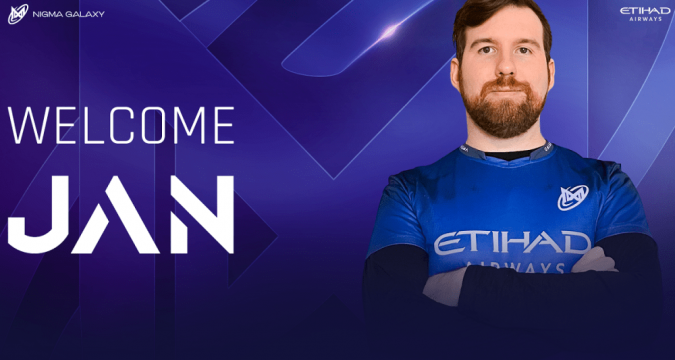 Nigma Galaxy, the esports division of MENA transmedia powerhouse Galaxy Racer, is excited to announce the appointment of Jan Hoffmann as its new Head of Operations. In his new role, Jan will be responsible for all operational aspects of Nigma Galaxy.

Jan brings over 10 years of experience in the esports industry ranging from media, production, player, and professional management, to Nigma Galaxy. He joins the esports organisation from Rix.GG, where he was CEO. Previously, Jan was at Fnatic, where he was Head of Team Operations and was responsible for leading organisation-wide esports operations. In this role, Hoffmann also handled all internal, organisation-wide operations for two years before his departure. Before he was appointed Head of Team Operations at Fnatic, Jan progressed his way up the organisation from manager and coach to Team Director of Fnatic’s League of Legends team.

In his new role at Nigma Galaxy, Hoffmann will be responsible for all organisation-wide operations. He will oversee the organisation’s pro teams operations, ensuring that the teams have all they need to compete at the highest level. He will also be responsible for all wider Nigma Galaxy operations, which entails nearly everything from HR, logistics, financial planning, coordinating with the departments to project management together with the operations team.

Looking ahead, Jan’s focus will be to develop and build on some of the new projects, including Nigma Galaxy’s efforts in supporting female esports such as the world-class CS:GO team or its new Mobile Legends: Bang Bang team in Indonesia.

Jan Hoffmann, Head of Operations at Nigma Galaxy said: “I’m very happy to announce that I have joined Nigma Galaxy as Head of Operations. Nigma Galaxy is a world-class esports organisation always striving to be the best and to replicate and build on the success they already had in the past. Working with this experienced group of esports veterans is incredibly motivating and fills me with excitement for the things we have in store.”

Christoph Timm, Co-Founder of Nigma Galaxy commented: “We are excited to welcome Jan to Nigma Galaxy. Jan’s immense experience within the industry will be essential as we continue to grow and strive for success. Welcome to the team, Jan!”