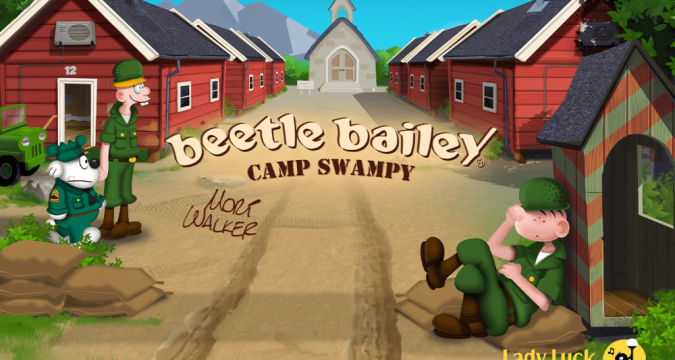 Lucky players can attain cash prizes by way of two memorable features, Wild Wake Up and the Camp Swampy Golf Bonus, both of which boast incredible gameplay and sleek animations that truly showcase the sleepy soldier and his comrades.

The Wild Wake Up feature is triggered when the Beetle and Sarge symbols land on reels two and three respectively. The duo will fight, and when the dust settles anywhere between three and six wild symbols are left behind on the reels, forming a big win.

In The Camp Swampy Golf Bonus, Beetle Bailey joins Amos T. Halftrack atop a cliff as he hits golf balls into the camp. Meanwhile, a Jeep drives around collecting prizes in a board-game style feature that only ends when the truck hits three live grenades.

Players can gamble their winnings in a traditional card game that can see them double or quadruple their prize. Those wishing to jump straight to bonus gameplay can utilise a bonus buy feature.

Heralding this exciting new release, Mads Jørgensen, Co-Founder and Chief Executive Officer of LL Lucky Games AB said: “A lot of hard work has gone on behind the scenes to ensure that we could release this incredible branded slot alongside King Features Syndicate, especially considering this slot is close to our hearts as Beetle Bailey enjoyed great prominence in Scandinavia, locally appearing as Knasen, Basserne, and Billy in Sweden, Denmark, and Norway respectively, becoming classic comics for over 40 years in these markets.

“There’s no doubting that Beetle Bailey is a truly iconic character that will put a smile on player’s faces. We’re absolutely delighted to have immortalised him in this brilliant new release.”

Carla Silva, VP/GM, Global Head of Licensing at King Features said: “Beetle Bailey has been entertaining people for over 70 years, and we’re delighted to see Mort Walker’s iconic character appear on the reels of this exciting game that we know fans and players alike will enjoy.”

Beetle Bailey was released exclusively on August 10th for ComeOn!, Adjarabet and Novibet. From today it will be available to all top-tier operators in Lady Luck Games’ key regulated markets.