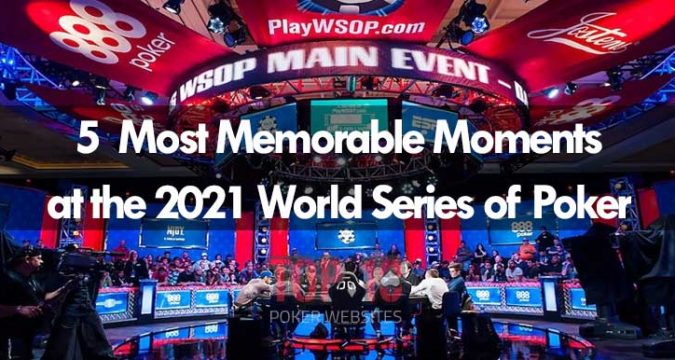 5 Of The Most Memorable Moments at the 2021 WSOP

The 2021 World Series of Poker (WSOP) finally came to a close this week, with the festival being hailed as a massive success. The Rio All-Suite Hotel & Casino played host to the series one last time before it moves to a new venue next year.

As we prepare for this upcoming transition, let’s take a look back at some of the greatest moments during the WSOP’s final year at The Rio.

Throughout the series, Phil Hellmuth made the money in 10 events and reached seven final tables which earned him another WSOP record for making the most final tables in a single year. And to top it all, he won his 16th bracelet in Event #31: No-Limit 2-7 Lowball Draw.

While a seventh bracelet has remained elusive for Daniel Negreanu this year, he was still among the top performers at the series. The main highlight of his 2021 WSOP journey was finishing 3rd in two events – Event #84 and Event #85 which ran on the same day.

Another big story to come out from this year’s series is Josh Arieh’s surprising win in the WSOP Player of the Year race.

The American poker pro climbed to the top spot out of nowhere just a week before the conclusion of the festival. Late challenges from the likes of Hellmuth and Negreanu didn’t stop him from taking home the coveted POY title.

Dragana Lim participated in the Main Event to raise funds for charity, and her efforts did not go to waste as she became the last woman standing in the tournament, finishing 64th for $95,700. All of that money will go towards an animal foundation that she and her husband had started in Las Vegas.

Michael Graydon is a terminally-ill cancer patient who wanted to play in the Main Event but couldn’t afford all the expenses. He asked for backers via Twitter and the poker community did not hesitate to help him fulfill one of his final wishes.

Poker pro Jonathan Depa and poker coach MJ Gonzales shouldered his $10,000 buy-in, while Maria Ho covered his Vegas trip. Graydon fell short of making the money, but it sure was one of his most memorable experiences.

Paul Butcher is a works as professor during the day and currently contributes to write articles for top10pokerwebsites.net during his time off. Visit Paul’s google+ page here